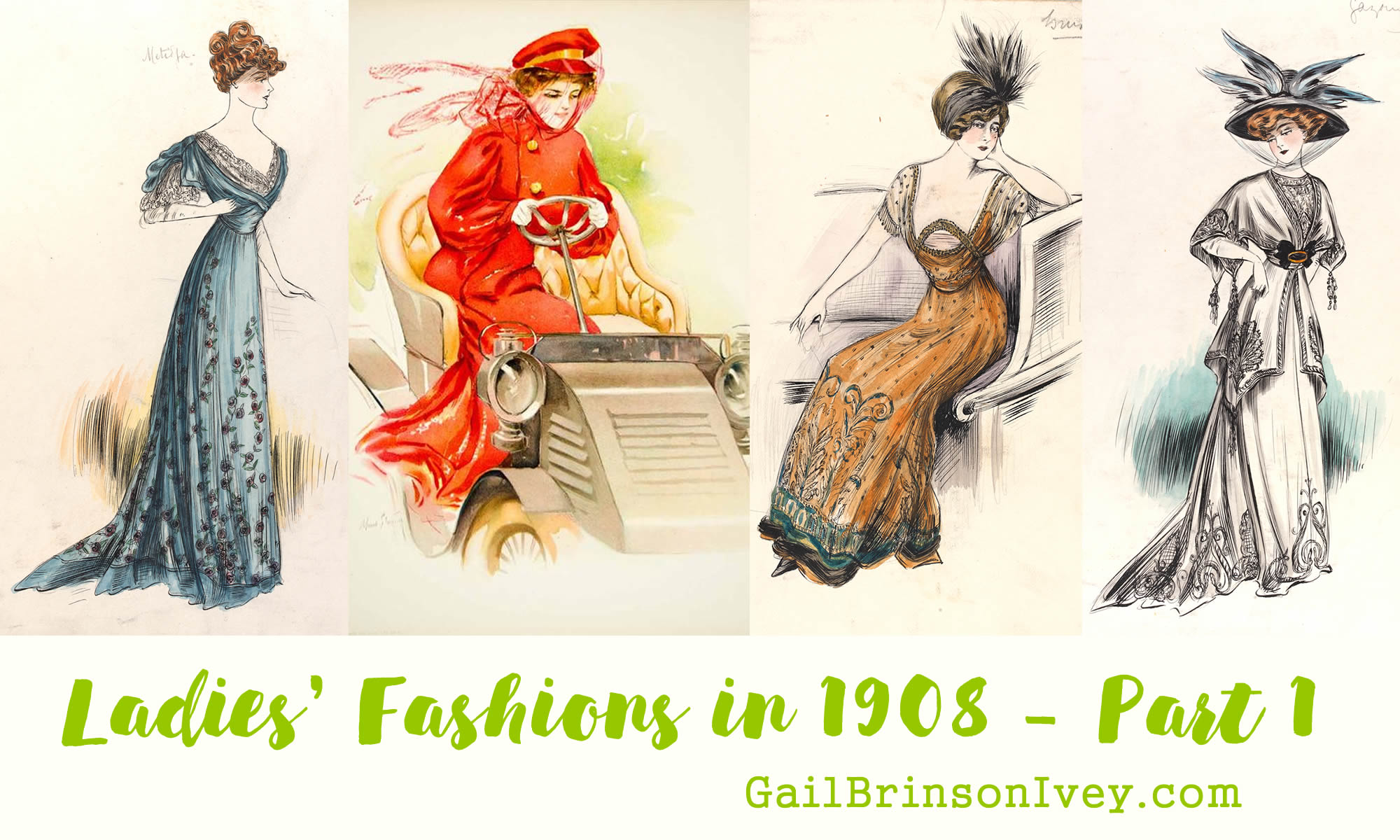 All Posts, History, Lightning on the Levee

IN LIGHTNING ON THE LEVEE, MOLLY B O’CONNOR COMES TO OUR CURRENT TIME FROM 1908. When she arrives, she’s dressed in the clothing she had been wearing on the spring afternoon that she was abducted by aliens. I’ve shown you a photo HERE of the dress that Molly B was wearing. But what other clothing choices were important to her, and to her friends, at the time?

Fashions in American society in 1908 were heavily influenced by both the Edwardian Period of England, and by La Belle Epoque of France.

King Edward VII in all his sartorial splendor. Image: thechapmagazine.co.uk

1901 began the Edwardian Period, when Queen Victoria of England died and was succeeded by her son, King Edward VII. The new king was already the leader of England’s fashionable elite, and set a style influenced by the art and fashions of Continental Europe.

In France, they called the era from 1895 to 1914 La Belle Époque, “Beautiful Era”.  It was a time of beautiful clothes and the peak of luxury living for a select few. The arts flourished, and many masterpieces of music, theater, literature, and visual art gained recognition.

Molly B’s 1908, like the rest of Western society at the time, was characterized by optimism, peace, economic prosperity, and technological, scientific, and cultural innovations. The Industrial Revolution had created new technologies that changed the way people lived. Gender roles shifted as women made use of the new technology to upgrade their lifestyle and their career opportunities.

For fashionable women, the invention of the sewing machine enabled the production of ready-made clothing for the first time in our history, and made it easier for women to sew their own clothes. No longer did every article of clothing have to be sewn by hand, enabling women to have larger wardrobes than ever before.

Two sewing machines manufactured in 1908. The one on the left is a very rare electric machine, and was probably very expensive for that time. Image: ebth.com. On the right is the widely used treadle style that didn’t require electricity. Image: blog.le-miklos.eu

I consider myself very fortunate to have two of these antique treadle sewing machines. One was a gift from my husband right after we got married, and the other is an heirloom in his family, and I’ve enjoyed using them.

I’m really excited about this series of posts about the fashions of 1908, because I get to use my love for, and knowledge of, fashion history!

Women’s fashions in 1908 were shaped by the introduction of a new style of corset that forced the body into an S bend, which was considered to be healthy. This style of corset was called the “Health Corset”. I’m not sure any corset is all that healthy, but it was an improvement over the previous ones.

Bodices were gathered in the front, which gave the women a pigeon-breasted appearance they called “Pouty Pigeon”. The skirt was trumpet shaped, with the front and sides of the skirt flared smoothly over the hips from the waist, flaring near the hem. Skirts had a short train.

Fabrics were soft and flowing, usually soft silks like chiffon, crêpe, or satin, lightweight cotton batiste or voile, or lightweight handkerchief linen. The silhouette of this period was soft and feminine. Sleeves were fitted or drooping with fullness at the elbow. For day, dresses had high necklines, and evening dresses had very open, plunging necklines.

The ideal shape for women in the Edwardian period. This drawing of two fashionably dressed women appeared as a fashion illustration for sewing patterns in 1901. Image: wikimedia.com

I wouldn’t be smiling like this if I were forced into this shape. 🙂

Most garments were heavily embellished with soft and frilly ruffles and lace. Lace would be either very fine and delicate, or very heavy, such as the Irish crocheted lace that Molly B’s dress was made from. Rich trims of silk taffeta and velvet were also popular, along with beaded ornaments, rhinestones, spangles, and velvet ribbon.

This was the era of the Gibson Girl.

Drawing by Charles Dana Gibson of the ideal American woman of 1908. Image: loc.gov

American artist Charles Dana Gibson satirized society with his cartoon images of “The New Woman”, who was competitive, sporty, well-educated, fashionable, beautiful, and independent. Brits and Americans alike called her the “Gibson Girl”, and Gibson’s drawings inspired the fashion of skirts worn with embroidered blouses.

Beautifully embellished ornate blouses took on a new importance and were worn by every class. Copying Gibson’s drawings or working from their own creativity, women created the tucks, fine embroidery, appliques, lace insertions, faggoting, pleats, and lace trim that were so popular.

The blouse could have a plunging neckline, a high collar, and/or a jabot (ruffle running down the front of the blouse). Sometimes it had a shirt-style collar worn with a man’s tie, a floppy artist’s bow, or a cravat secured with a brooch. It was usually made of white handkerchief linen or cotton.

Gibson’s wife Irene was his inspiration for “The New Woman”.

Most fashionable women would also have a tailor made “costume”, which we would call a “suit”. The jacket and skirt were made from the same fabric, which was typically tweed or wool serge, a smooth and durable weave that lasted well and was easier to clean. Under the jacket they wore a shirtwaist blouse.

Although the women’s tailor made costume had been worn since the 1880’s, it had been considered to be masculine and unladylike. By Molly B’s 1908, though, every fashionable woman had to have at least one.

Some suits were made from lighter weight fabric and were worn to weddings, shopping, visiting, and certain other events. Tailor made costumes made from the heavier tweeds and serges were known to be ideal for traveling.

Edwardian woman’s duster for riding in a car. Lightweight, dust-colored fabric kept the clothing underneath from getting dirty while traveling. Image: studyblue.com

Most motorcars driven in 1908 didn’t have windshields, and most roads weren’t paved, making excursions in a car a dusty, dirty event.

Cars didn’t have heaters either, so, when Molly B and other fashion conscious women went for a spin in the autumn or winter, they wanted to have a pretty “Manteaux Automobiles” (car coat). The car coats were highly fashionable, and were cut straight from the shoulder to about fifteen inches below her waist, giving the coat a boxy appearance.

And almost always, men and women both would wear a Duster over their whole costume, to keep the mud and grime off their clothing. It was a full length, straight coat and was usually brown, khaki, or beige, so as to not show dirt.

When riding in a motorcar, a woman would also wear a hat covered with a veil tied around the throat, which held the hat in place and helped protect her face from the dust.

Color chromolithograph by artist Malcolm Strauss of an Edwardian woman in a red duster and veil behind the wheel of an antique car. Copyright 1908, The Gray Lithograph Company.

Afternoon dresses were meant to be seen. This was the time for going visiting or walking in the park or around town. The day of her abduction, Molly B and her companions enjoyed the afternoon walking into town and back.

Frequently,  the afternoon dress was white or off-white with colorful trim. The fabric was usually lightweight cotton or sheer lace or netting, and was embellished with embroidery, tucks, lace, faggoting, and all the other beautiful trims that were used in the period. With sheer fabric and open laces, the woman would wear an underdress or decorative gown underneath.

Because Afternoon Dresses were meant to be noticed, care was taken to make sure their fit was flattering, and that they were trimmed impressively. But even though they were made for walking around, like all the other dresses of 1908, they had a short train.

There’s more! Read “1908 Ladies Clothing Fashions – Part 2“, where I talk about more outerwear, underwear, swimwear, hairstyles, accessories, and evening wear that Molly B O’Connor would have worn in 1908.

Which of the Edwardian outfits would you like to adapt for today? I would be honored for you to tell me in the comments below.  🙂