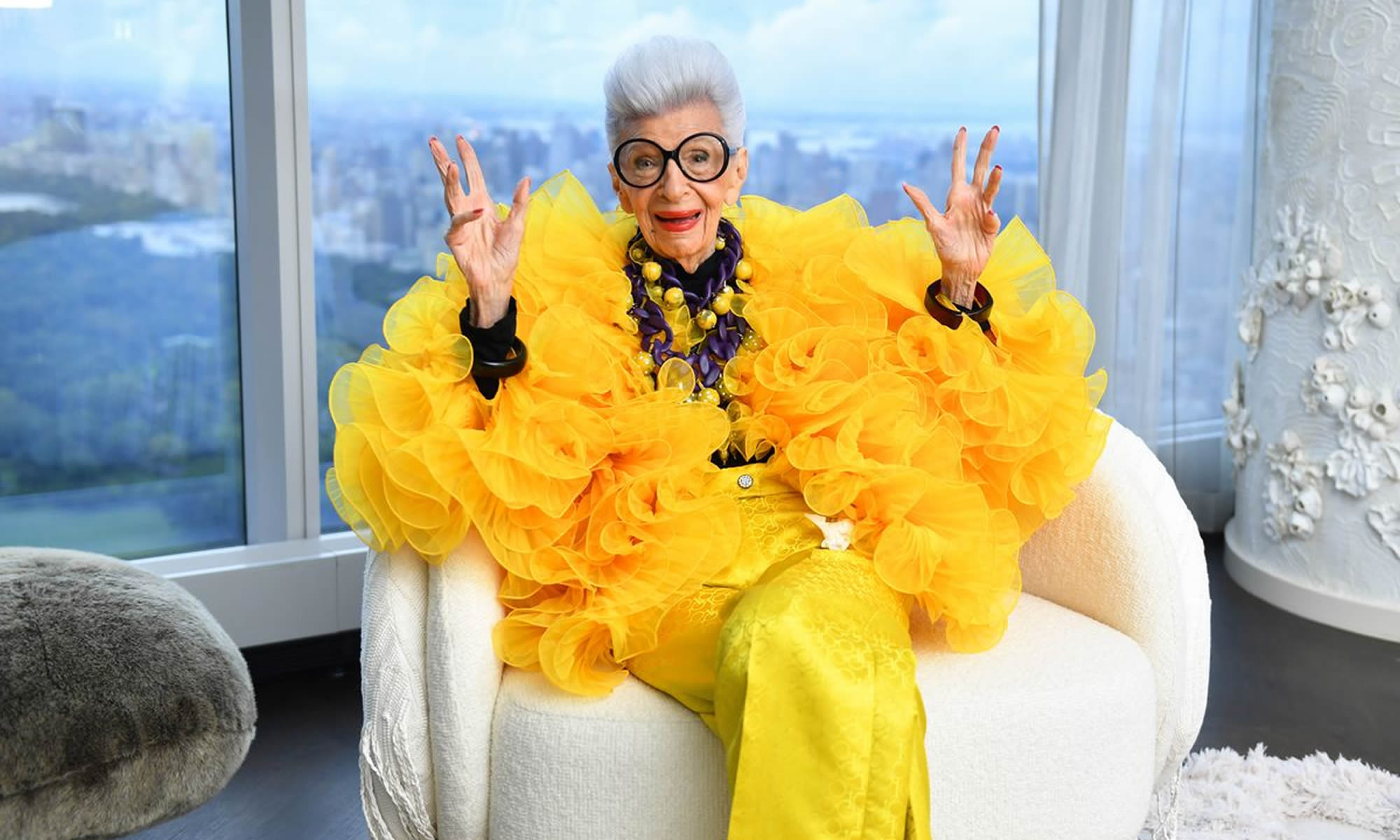 I just can’t get enough of Iris Apfel.

With her unrestrained use of vibrant colors, her chunky layered necklaces, and arms full of stacked bangles, Iris Apfel’s style can only be described as “Maximalist”. “More is more and less is a bore” is her motto for her style, and for her life.

So how did this centenarian become one of the world’s most recognized style icons?

But first, who IS Iris Apfel?

Iris is listed as one of the world’s 50 best-dressed women, with an iconic, eclectic, fiery individualistic style. She says that her inspiration may come from anywhere, and she encourages others to find their own personal style and courageously wear it.

Iris was born in Astoria, Queens, New York on August 29, 1921. An only child, her father’s family owned a glass and mirror business, and her mother owned a fashion boutique. Although raised on a farm, she often rode the subway in to explore Manhattan, and fell in love with Greenwich Village. She shopped regularly in the Village’s antique shops, starting her extraordinary collection of jewelry from around the world at a very early age.

A lifelong New Yorker (she also has a home in Palm Beach), she studied art history at New York University and attended art school at the University of Wisconsin. Her career in fashion began when she got a job as a copy runner at Women’s Wear Daily, which has been the international fashion industry’s top publication since 1927. She was also an assistant to fashion illustrator Robert Goodman.

In 1950, after working for interior designer Elinor Johnson, where she dressed apartments for resale and honed her talent for sourcing rare items, Iris set up her own textile business with her husband Carl Apfel. Their business, Old World Weavers, led them to get to know some of the most important personalities of the 20th century. Old World Weavers’ clientele included nine different US presidents, for whom Iris and Carl advised and carried out interior decoration and historic restoration projects at the White House.

Old World Weavers also gave Iris reasons to visit the most remote points on Earth in search of fabrics, materials,and inspiration for their projects. On these trips, Iris continued to collect accessories for herself, further strengthening her eclectic and extravagant style. She also bought pieces of non-Western, artisanal clothes, and wore them to clients’ high-society parties.

So, who is Iris Apfel? She is a successful self-made entrepreneur, fashion designer, and interior decorator. With her famously eccentric “why be boring?” attitude, she has always been successful in her various career routes. But what she is now known for is her iconic, individual style.

“More is more and less is a bore” became Iris’ motto. Big round glasses, brilliant red lips, and swept-back white hair are her distinguishing marks. She combines in an hypnotic appeal designer pieces, imitation jewelry, second hand items, and non-western traditional accessories. In Iris’ wardrobe, pieces from major fashion designers mix it up with thrifts and antiques. Everyone in Manhattan and Palm Beach came to know her by sight.

And then her unique style was noticed by someone from the Costume Institute of the Metropolitan Museum of Art.

They offered to create a retrospective about her vast personal clothing and accessories collection. In 2005, the exhibit “Rara Avis (Rare Bird): The Irreverent Iris Apfel” opened. Eighty-plus mannequins were dressed in Iris’ complete accessorized outfits, exactly as she had worn them. Iris promised to gift every outfit in the exhibit to the MET.

Rara Avis was the museum’s first exhibit which focused on a living person who wasn’t a designer. It was a resounding success.

Hervé Pierre Braillard, the designer behind the Carolina Herrera label, was uncharacteristically effusive. “Everyone is going to be talking about this,” he predicted. “To miss this if you are in the fashion business makes no sense.”

Designers from every major fashion design house toured the exhibit, along with throngs of people from every walk of life. The show had people chattering with a heat and enthusiasm rare in the fashion world. All the excitement about the exhibit put Iris in the eye of international publishers and designers, making her into a world phenomenon. Her final push into the international spotlight came when Albert Maysles created the 2014 Iris documentary.

Since then, Iris has stayed quite busy. In 2018 she said, “I’m so busy, I work like a crazy person. I love to work, and particularly the last two-and-a-half years since I lost my darling husband, who was with me for 68 years,” said Apfel. “We were in business together and everything else, so the loss was monumental. And I decided that to keep my sanity, I better just work even harder, because if I stay home and think, I’ll be very unhappy. God was good to me, and I got a lot of interesting commissions. All kinds: designing, modeling, speaking, traveling, and so I’ve been working like mad.”

In 2018, Iris became the oldest person to be immortalized as a Barbie doll. “I think it’s totally hysterical,” she told CNN at the time. The Barbie, designed to look like Iris, was styled with an assortment of Iris’ outfits.

If you want one of the Iris Barbies, here’s one on Amazon:

Iris Apfel doll with another Barbie wearing Gucci and styled like Iris.

Following the success of Rara Avis and Barbie, Iris published a book in 2018. She said, “A couple of years ago in one week I had three different telephone calls from three different publishers. And they all said, ‘What about doing a little book, musings, just what you’re thinking about. Just something for the youth market,’ because I do have a lot of young fans, and I said, ‘Gee, that sounds like fun.’”

The book is filled with personal anecdotes and photos. Iris is a very private person, so she doesn’t talk about the intimate things that so many other celebrities typically do. Instead, she talks about wearing denim as a woman in the Forties, her first jobs after college, meeting her husband and secrets to a long marriage, her interior design business and design restoration work for the White House, her love of jazz music, and her disdain for smartphones.

Here’s her book on Amazon:

Iris was chosen to be the cover model for Harper’s Arabia for her 100th birthday. Inside the publication, she wore several outfits with clothing and accessory pieces designed by Arabian designers. For the cover, Iris wore this gorgeous trench coat designed to look like red roses.

“Iris epitomizes personal style — a style that is both beautifully flamboyant and eclectic, as well as being totally ageless,” said Ann-Sofie Johansson, creative advisor at H&M Womenswear, in a press statement. “She shows what fashion is all about: it’s a means of expressing yourself, who you are or want to be and a way to have fun.”

The H&M Iris Apfel Collection was greatly anticipated for months before it finally came out in March 2022. When it was finally published on the H&M app and website, it sold out within hours. Was that because of Iris’ undying devotion from hordes of young people, or was it because the world of fashion is starved for color and fun? I say that it’s both!

Use this link to get $5 off your eyewear purchase from Zenni: https://bit.ly/3CC7uDw

Currently there are 85 Iris-designed glasses at Zenni! If you use my referral link, you’ll get $5 off your next pair of glasses! Here’s the link: https://bit.ly/3CC7uDw

Style vs. Fashion According to Iris

Always jovial and bright, Iris Apfel enjoys this unexpected media attention. She laughs that she has suddenly become a “Geriatric Starlet”. But, she says, “I have been doing this all my life and now I find lots of magazines, especially European, that are writing about me. But I am not doing anything other than what I have been doing for the past 70 years!”

So what does she have to say about personal style – and the difference between Style and Fashion?

Here’s her differentiation between the two:

How to create your own style, according to Iris:

Thank you for reading!

Iris Apfel offers us all some timeless style advice. “The world is becoming so homogenized, it’s very boring,” she said. “I think difference is what’s so interesting. Be yourself.”

(This article contains affiliate links. If you click one of them and make a purchase, I might get a small commission.)